Freddie's story is all about his artwork and why the Art Studio is so important to him.

Right Freddy, you've been coming to the studio for a few years? Yes, a few years.

And do you enjoy your painting and your artwork? Yes, I do... Course you do.

What's the first thing you do when you come to the studio? Have a cup of tea and a chat. Yeah, who do you chat to? You, Albert, Greg... Ah, we have a good laughs, don't we? Yes.

Anyway, then you get down to the serious stuff, you start painting. What do you like to paint? Canvas's and how many canvas paintings have you done? I've done loads, but there's 4 really good ones.

The first one that you done was a very big canvas, wasn't it? How big was it? It was massive.

And what influences did you have for that? It was about going to Morrisons to do shopping. You like going to Morrisons. You've got to think of the prices first, you've got to save the money. Anyway you've painted a big canvas called Freddy Goes to Morrisons, didn't you? It got quite a bit of publicity, didn't it? It was in the monthly magazine at the Linskill.

But you like music, don't you? You did another canvas after that, an album? An album cover, yes.

Called Freddy's Greatest Hits, cause you like your music. Who do you like again? Abba, Queen, all sorts of music!

Then you did another one with yourself on but you couldn't think of a title, could you? So you called it Can't Think Of A Title. And that's also hung up at the studio at Linskill.

And Kevin helped you with a lot of your paintings, didn't he? Yeah. But Kevin had to move, were you upset that he had to move? Yes. You had been working with him for a while.

You've just won a competition through the Hidden Thoughts of Learning Disability art competition. You won the Adult section. Won a prize for £500 was chuffed with that.

When you come to the studio you come at 1o'clock and leave at 3 o'clock , so what's the last thing you do when you leave the studio? Sign out. Say goodbye, then come back next Monday again.

You've got some new friends helping you out, like big Chris, daft Geordie and we hope to do some nice art pieces in the future. We're doing the art studio sign first and then after that because you like music we are going to try and do some pop stars portraits. Might even paint yourself again, saying as your face wins prizes - ok then. 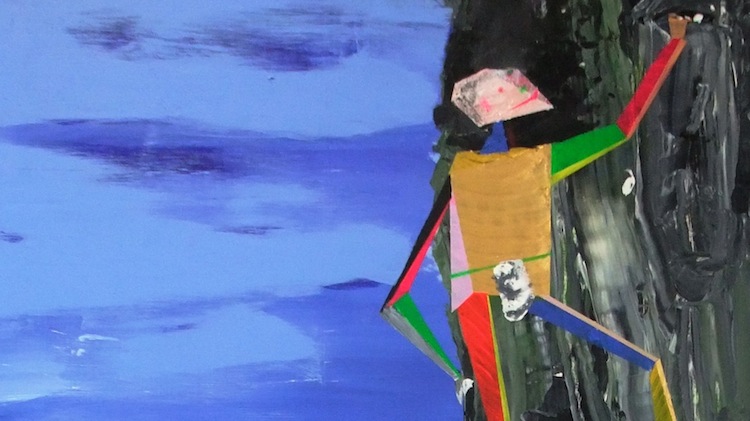 The bus will get me there