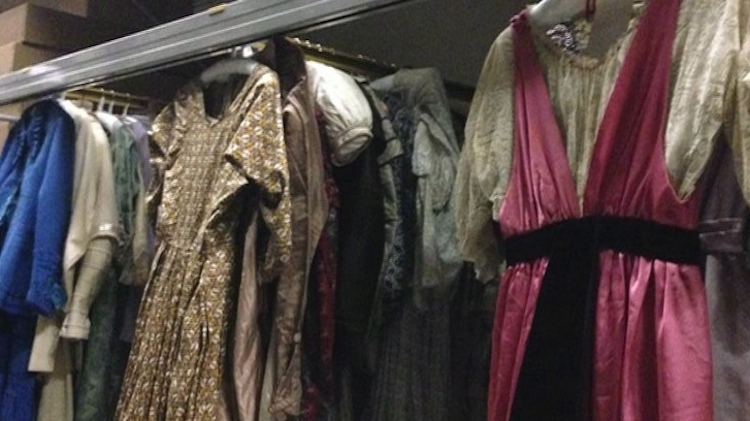 An interest in costume sparked an idea for Lorraine to recreate a World War One costume inspired by her research during the Wor Women project.

When I was first asked if I would be interested in the Wor Woman project, my first reaction was, boring, besides I didn’t want to know what my ancestors got up to if the present lot are anything to go by. Then it was explained to me it needn’t be necessarily be about family, it could be about the suffragettes, or the role women played in WW1, hmm still not sure, so they brought out the big guns, costumes (cue sparkly harp music,) now that interested me.

My research began, just how did they get from formal Edwardian S shaped corsets to the free flowing flapper look of the 20s. Answer Poiret, no not the detective Paul Poiret the designer, his influences were eastern and Turkish national dress and they simply did not sit well on a corset, and so he developed undergarments that were more comfortable and practical, hooray for the bra.

To get back to the project, a trip to Beamish was planned and me being me thought - I know, I’ll make a Poiret inspired hat. Back to the Internet, you would not believe the variations of styles around this time from huge picture hats to scull hugging turbans. I decided on a cross between a sort of pill box and turban. I am pleased to say it came out quite well, and was easy enough to make, only one problem it definitely did not go with jeans and trainers.

This was turning into a proper project now, not the I’ll get away with making a hat and that’ll be it I had planned on. Back to the internet, what style, Suffragette, they wore white cotton to stand out in crowds, me in white I don’t think so, land girl in dads trousers and shirt – nope won’t go with my hat. So now I’m thinking Downton Abbey and back to my old pal Poiret, I decided on what was described as a walking outfit, a long hobble skirt with mid length peplum and bolero style jacket. Only problem was the patterns for that era were explained in measurements angles and arcs, no pictures of what pieces should look like. So Basically I fiddled it, and it looked great on Dolly my mannequin.

Time to try it on, now I did tell you it was a hobble skirt, this is a long skirt that flares at hips and gets narrower at ankles, which meant I couldn’t flipping walk! Back to the Internet, there must be a trick to it. There was, tie your knees together so you take smaller steps as not to rip your skirt. I don’t think so, I also found out the hobble was quite short lived in this form as women were prone to falling over whilst trying to manoeuvre steps and some were actually killed because they could not move quick enough to avoid danger. Really now I find out about it, my solution to put a very un-period split up the back of the skirt.

To conclude Beamish was great, everyone loved my outfit and the staff even humoured me by curtsying, after all I was dressed as a Lady, up until the point I showed a little too much interest in their fantastic range of costumes (I knew I should have taken a bigger bag.) I basked in all the praise that everyone gave me, even though some of the other visitors thought I worked there, and even managed to get on a tram, which was an experience as my so called friends thought it would be amusing to get me to go upstairs, to see how high my split would go. Have you seen how high those steps are!