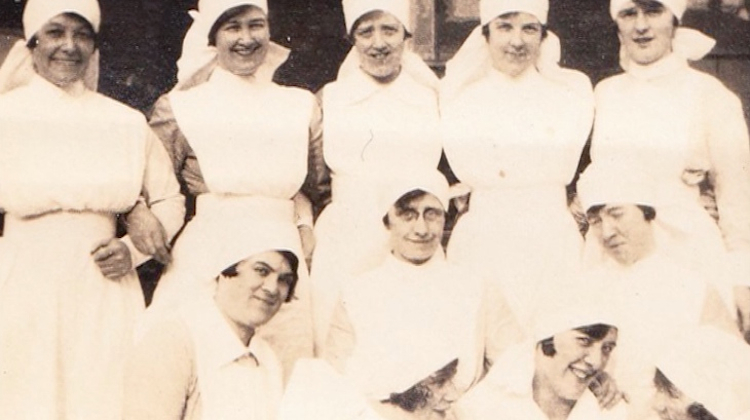 Mary wanted to do her bit for the war effort so she decided to become a nurse.  Her niece, Gwen helps tell her story.

I am Gwen Usher nee Gilhome and my aunt Mary Isabella Gilhome lived in Heaton, Newcastle upon Tyne.

Mary was 20; she watched as her two brothers left home to defend their country. She pondered over this, as up to now women’s work was mostly domestic or in shops.  “What could she do to help?”  Suddenly she knew! The posters inspired her. They wanted volunteers to make sacrifices, and women too.  She saw a poster “We Need You!”

“I will be a nurse and care for the sick and wounded as they return from the scourges of war.”

She applied to Newburn, Gosforth, and Castle Ward Joint Hospitals for Infectious Diseases.  Mary was appointed to Newburn and Lemington Hospital in 1914.

She arrived at the Hospital after a long walk down a country lane. It looked big; a main entrance with several brick units in the grounds was surrounded by a fence and trees.  Mary trembled as she knocked on the door. What will it be like?

Taking a deep breath as the front door opened, Mary was met by The Matron, who instructed her about her duties. Here she trained under the eagle eye of Matron Beatrice. The rigorous training lasted 2 years, including 6 months probation. Matron was extremely strict but the training was good and Matron proud of her hospital and her Nurses.

The days were long on the wards; sometimes it was dark as she set off down the lane and along Scotswood Road, hatpin at the ready!  By 1916 she received her certificate of competence in all aspects of Infectious Diseases, First Aid, Hygiene, Treatment of Wounds and General Care.  Mary was overjoyed. It was vey hard work, tinged with sadness but great satisfaction from those who recovered.

While at Lemington, Mary, determined to help, saw posters appear from The War Office.  Save and Prosper.  Volunteers wanted for the National Savings Movement.  Mary still training, set up a saving scheme in the hospital. Every week she encouraged the workers to save to help win the war.  She sold stamps and for every fifteen shilling and six pence on their card they could buy a certificate, which in time was worth £1.  Mary recorded and banked the money.  In appreciation for her work as Honorary Secretary of the Hospital Group she received a Certificate from Lloyd George.

Mary nursed there until 1926 when she left to nurse her father until he died. In 1928 Mary made nursing her career until she retired in 1959.

Courageous, determined and respected by all.

Mary had had a wonderful career and remained a friend of Matron.

Lemington Fever Hospital is no longer there; it closed in 1995 and was replaced by houses.