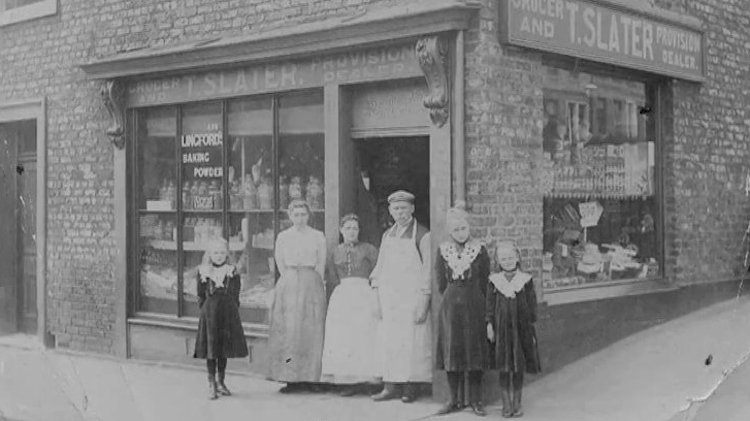 Elaine reflects on her family history and the stories she knows about the women in her family who ran the family grocers shop in Newcastle-upon-Tyne during World War One.

This photo was taken after the turn of the century and shows my ancestors standing outside the family grocers shop. The head of the household was Thomas Slater, married to Dorothy Ellen Slater and together they had four daughters and two sons. The daughters were Charlotte, Margaret also known as Maggie, Sarah and Dorothy also known as Dossie. Thomas died in 1907 and from that point onwards his wife took over. Dorothy Ellen is listed in trade directories for Newcastle throughout World war one and beyond as the proprietor of Slater’s Grocery Store. The shop stood on the corner of Maple Street and Sycamore Street in the West End of Newcastle, roughly where Newcastle College is now.

As the daughters grew older they worked in the shop. The 1911 census lists Charlotte, Maggie, and Sarah who was just 14, as ‘assistants in business.’ Throughout the war years the sisters helped their mother run the shop, and I imagine business was difficult as rationing took hold.

Charlotte’s life changed significantly during the war years. She was married to James Waggott on the 9th of August 1915. James was employed in a reserved occupation and did not go to war. James’ father was a postman and Charlottes attended the postman’s’ ball in 1916. Charlotte gave birth to two daughters, one being my auntie Elsie in August 1918. Charlotte gave up her role in the shop during her pregnancy to take on the new roles of wife and mother.

The family shop was obviously a stepping stone for them and provided all of the siblings with a financial start in life. It sis interesting that although the girls worked at some point in their lives, there was a choice to be made between career and motherhood. The two sisters, who married and had children, gave up their jobs, while the two sisters who did not marry continued to work. I wish I had taken more time to get to know the sisters before Auntie Elsie died as I’m fascinated by them.