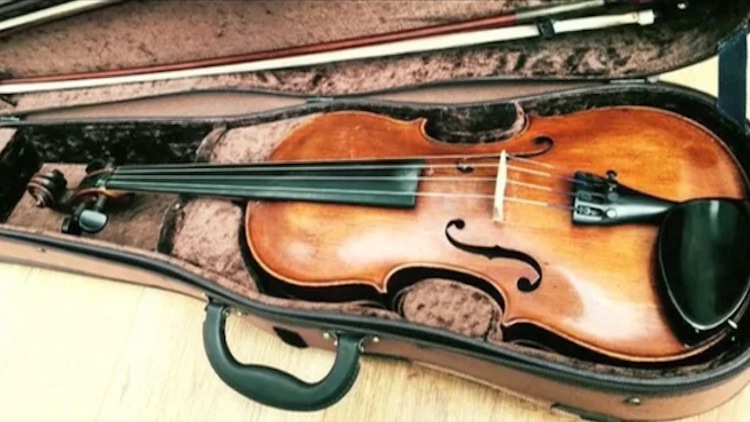 When disaster befalls a treasured possession Chris is reminded of the role that Music has played in his family's life going back through the generations.

There aren’t many objects I’d say I was attached to but my violin would definitely be one of them.

I’ve had it since I was a teenager. My parents bought it for me to replace the one I had been learning on which belonged to my Dad.

I don’t remember the moment I first played it but I remember the feeling. Compared to Dad’s, it had a gorgeous, warm tone and it made me sound much better than I actually was. It made you want to play it.

The sad thing is it has mostly lived in its case since then. Ignored, if not unloved.

It was a few years ago that my daughter, now 12, started learning violin for herself. This seemed like a great opportunity to get back into playing so I retrieved the case form down beside the bookcase, blew the dust off and opened it…

…only to discover that it was in bits!

The joint between the neck and the body had failed at some point, I don’t know when. It was lying there, the strings all slack and the all these parts at odd angles.

I was devastated, not so much at the extent of the damage, more with the sense of guilt that I’d failed in my duty of care.

I don’t feel like it fully belongs to me. I don’t know who made it, who had it before me or even how old it is. I’m just looking after it for now before the next person takes it on. And I’d let it down.

In the end, it wasn’t too difficult to fix. I took it to a little shop in Hexham where it was put back together, refurbished and restrung. You’d never know anything bad had happened to it.

I still don’t play it as much as I could but it’s much better looked after now.

Part of the reason I treasure the violin is that so much of my life revolves around digital things. But the violin is different. It doesn’t need plugging in or amplifying. It’s all about spruce and ebony and horsehair and whoever is playing it and I like the mystery of not knowing exactly where it came from.

And although I’m not a serious musician by any stretch of the imagination, it’s something that connects me to all the parts of my family for whom music has been or is becoming part of their lives; my son and daughter, learning drums, piano and violin, my Dad the choirmaster and all the way back to my Great Grandfather who lost his double bass and his livelihood in a fire at the Belfast Hippodrome.

He never had the privilege of handing his instrument on to someone else.

It’s my job to make sure I can pass my violin on to a good home and in one piece.