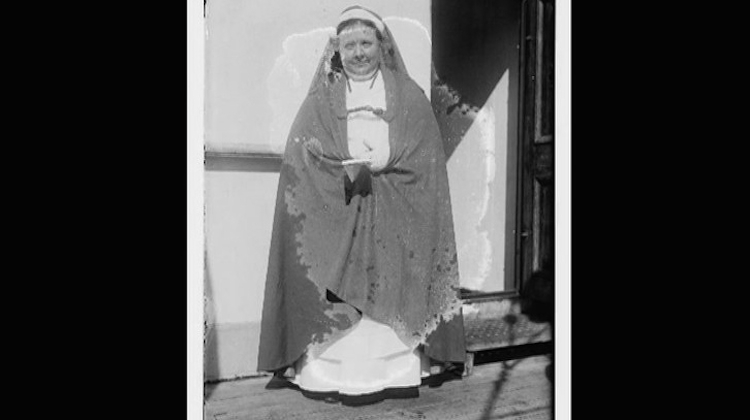 Anne tells the story of Caroline Gardner Bartlett who devoted her life to fundraising for the war effort during World War One.

Caroline Gardner Bartlett was born in Ohio in the United States. At the age of 30 she married a Canadian Dentist. Her early years we devoted to conducting singing classes and went on to gain quite a reputation in Europe. This enabled her to use her friendships, vocal talents and administrative abilities to aid the wounded of French military, and enabled her to secure supplies from sheets to trucks before official organisations became effective.

It was about that time she devised a religious habit “Purple Cloak” so she would be recognised and could travel freely between France and England in 1914 -1915, to raise supplies to help relief organisations. Her husband died in 1909 and left her quite wealthy, she sold all of her worldly possessions, which included personally jewellery; the proceeds were spent on hospital equipment in England and France. Being the first individual to carry out this work the French gave her the title of “ Sister Beatrice” and looked upon her as a very good friend.

During one of these meetings Sister Beatrice made an appearance and suggested that meetings should be held during the meal hors at all the places in the Works. To discuss a fund to assist those who were suffering during the war effort. By means of sending comforts to these areas so successful were these meetings that on considering the reports received, a request be given asking for a weekly deduction of 2D for men and 1D for women to enable supplies of various equipment in hospitals across England and Europe. The first deduction was made 7th of May 1915.

The funds were used to supply comforts and equipment inn hospitals in England and Europe. Sister Beatrice was given recognition for her work in inaugurating the fund.

During the 1920’s her eyesight began to fail, she made a trip to England for treatment and was declared blind. The last years of her life were occupied in writing her autobiography “The Purple Cloak,” and was unsuccessful in the search for a publisher. She died in 1938.