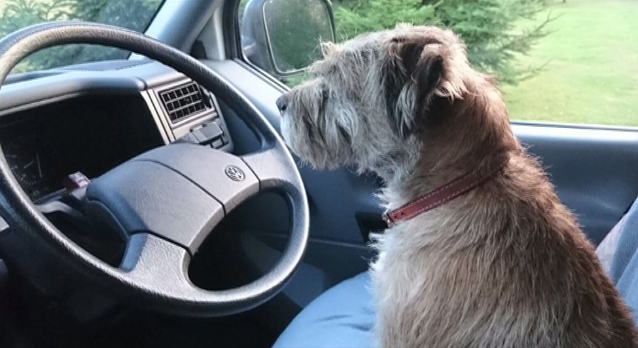 A story about a T4 Trooper - the love of the freedom and all year round van, and preserving it for the future.

Hi, my name is Pip McKever and me and my hubby John adore our T4 Trooper. It's a 2.4 non turbo diesel. 1993 L registration, so very nearly a quarter of a century old. We bought it for two reasons, the first to enjoy the freedom and the fact that...... where ever we go we are anonymous, not enmeshed in everyday life, it's trials and tribulations. The second reason is to   preserve the van for the future. We've always had classic cars and it's everyday folk like us that continue to treasure these vehicles and ensure their survival.

This is the very floral curtain in the solid pop up roof, that we wake up to every morning. It's also very pink, as are the seats. This was 'tres chic' in the 1990s, it's growing on me, though I have to admit that there are many blue throws covering the upholstery.

The second thing I see when I wake up in the van is the dog, who abuses the fact that in a camper there are no internal walls and you sleep where ever you like.

John's first job of the day is to walk both dogs whilst I have a daily workout, by lying on the floor and pushing the folding bed back into a sofa. It goes from flat to zig zag due to my quads and other lower limb muscles. Then, feeling invigorated I flick on the kettle and hug a mug.

When John returns, if it's summer, we eat outdoors and shove everything possible into the drive away awning. This modern miracle also doubles as a wardrobe, dressing area, laundry and dare I say it … the loo!

I don't care to drive, so I let one of the boys do that!

This year in May down in Norfolk and Dorset we were fortunate to find that big yellow ball in the sky , known as the Sun. Honestly, it was so hot it was like tenereefi and to limit sun damage we took precautions.

We are real people people and love cultural experiences.... some amusing and unexpected, some bizarre and demand explanation and other are just so moving.

We also use our van in the Winter, usually Scotland, with snow on the ground. There is nothing more snugly than dark early nights, foils on the windows and curtains pressstud to the walls. The heating turned on and two other methods of keeping warm........woolly clothing and......whisky.......that can lead to a power surge....

Well , from the Highlands of Scotland to the Jurassic coast, we will campervan until we drop. We will continue to treasure the original features of this ageing van . Here we are the nearest to nature and to being ourselves as we could possibly be...