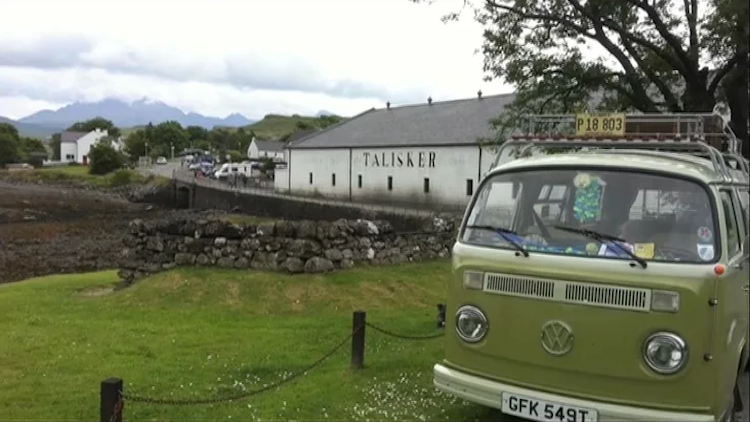 A story about how bad weather and breakdowns can't put you off when travelling in a campervan!

We were off on our first ever road trip in our 1979 VW camper van to the west coast of Scotland. The weather was miserable and the forecast was for lots more rain and the main midge season. But we weren’t deterred and we were armed with every lotion, potion and citronella burning device known to man.

The ten day trip was a test to see whether we could live in such a small space for any length of time and to test how the van would run over a large distance. If all went well we hoped to travel further afield in the future – but that’s another story!

We planned to take in as many castles, distilleries and single malt as possible and that’s just what we did! Our route took us to Ayr, Loch Lomond, Glen Coe, Skye and Oban. Our days were spent site seeing and enjoying the wonderful scenery and our nights were spent cooking local produce on the BBQ and sipping single malt. Sadly, for once the weather forecast had been totally accurate and each day our activities were accompanied by a good drenching. But I guess at least it kept the midges away!

All went well with our travels and the van was running great until we were on our way to the Talisker distillery on Syke and we noticed a sudden change in the engine sound. Not the best place to breakdown as we were miles away from anywhere. Luckily my husband was able to quickly solve the problem and we were soon back on our way. This was just the start of our breakdown experiences which we have since learned are part of normal VW life....

We were just 3 miles from home when our second breakdown occurred. The accelerator cable had gone and we had no spare. They say that necessity is the mother of invention and my resourceful husband soon adapted a cable tie which did the job. Unfortunately with the cable tie attached where the accelerator cable had once been, we could only travel at 60 mile an hour or alternatively at zero but the road we were travelling along had a 50 mile an hour limit. A second cable tie was added bringing our speed down to 30 miles an hour and so we were able to limp home.

Since then we have done a few more road trips. The weather and our breakdown reputation were set to continue but we were nothing if not consistent.

Off we went to France where it rained every day and at one point our camping spot became totally flooded and we had to be relocated.

In our next trip we ventured all the way to the south of Spain in the hope of finding some sunshine, only to get caught en route in a flooded tunnel in the centre of Madrid during a rain, hail and snow storm.

Sadly this one proved to be a journey too far. A week later 1200m up a mountain in the middle of nowhere in central Spain our van broke down again.

Thankfully we had taken out gold standard breakdown cover which was worth every penny when we realised the van could not be fixed in Spain, we were flown home and the van came home two weeks later on the back of a low loader. We have never been so pleased to see her!

But has this put us off? Not at all. Our trips have brought us so much fun and many happy days, some of them even sunny ones, despite our reputation! Later this year we are off to France again. We just make sure we take lots of waterproof clothing, a full breakdown kit and good AA cover wherever we go!!