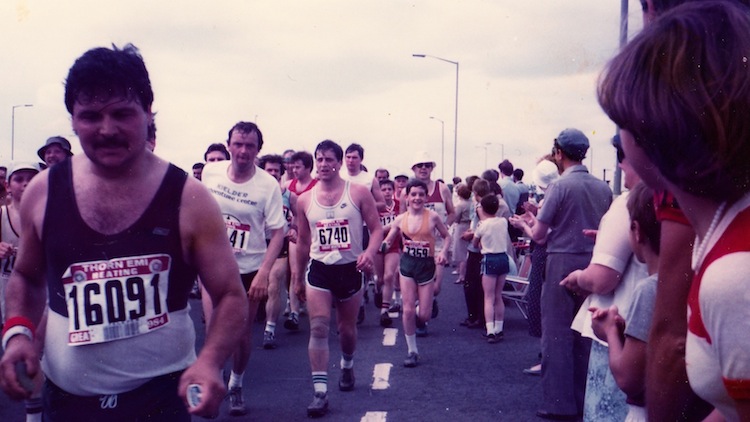 Michelle's story of her wonderful experience as one of the volunteers who took part in the Great North Million Opening Ceremony.

The Great North Run has been part of my life since the first one in 1981. I’ve yet to miss a race as I’ve either watched it from the route or ran it and that’s why I didn’t hesitate to volunteer to perform in the opening ceremony.

The Great North Run in the 80s was a family day out, setting up camp at the half way point at Gellgate, grandma baking goodies for us and watching for family and friends, my brother, my uncles and my cousins all ran in the early years. In the 90s the urge to take part took over, I didn’t train well and I finished in 3 hours and 19 minutes but it was an amazing experience.

For the last 7 years I’ve been part of the cancer research team on the cheering bus on the last mile knowing those runners on the coast road need the extra boost.

The magic began at rehearsals with Nathan our choreographer and his dance captains making sure we had fun and tuning us into dancing angels. The day itself was hot and sunny and we piled into the sage, given our boiler suits, foil blankets, glowsicks and day glow headbands.

A completely surreal moment was when the toilets were jam packed with us girls in boiler suits piling on the make up and doing our hair; it was completely hilarious.

A highlight for me was the end of the rehearsal watching the sunset over the Tyne bridge as Mark Knopfler played local hero, the sound of his guitar was amazing, the scene was stunning and you just knew an unforgettable night was about to unfold.

Standing on the Millennium Bridge waiting to start, seeing thousands fill the quayside looking best it ever did was just brilliant, we just kept looking at each other, grinning like idiots. Great North Run in Geordie royalty kicked off the show and we felt like stars too. No stage fright, no nerves, just pure adrenaline. The fireworks and music brought the Tyne to life and seeing boats sailing down the river was electrifying. Taking our places on the Gateshead quay for the finale we began our electricity routine and as I tuner around Jimmy Nail and Sting were immediately behind me. The enormity of the event was brought home to me right there and then, two huge stars looking on in total amazement. They were proud Geordies just like us, not able to believe their eyes either. Seeing the millionth runner gliding in flames down the river was quite a moment, we shouted “ogi ogi ogi” to echoes from the pitmen on the quayside it was just fantastic. I don’t know how I didn’t cry it was hugely emotional but such a buzz. Being a cast member, meeting friends and playing a part in Tyneside and Great North Run history is a huge privilege and something to tell the grandkids.

I’m enormously proud of the Great North Run, those who run, those in my home town of South Shields who dish out hundreds of ice pops, thousands of charity runners, legends like Jarra Jim and Tony the fridge, the crowds who watch in all weathers. The Great North Run shows Tyneside at its best, long may it continue.