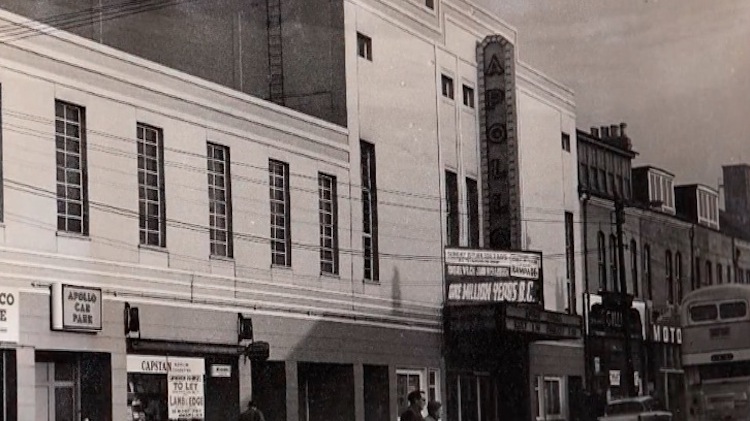 Judith recalls her memories of the Apollo Cinema which used to be on Shields Road in Byker, Newcastle and some of the other cinemas in the local area.

Well I can always remember the Apollo cinema at the bottom of shields road. It was always dark and it was very unpopular regarding the outside of it but it was a nice little cinema and people were very helpful and used to pay your money at the foyer and then they had layers of sweets where you could go and by what you select. You were taken in by an usher, with a torch and you were allowed to sit, she would show you to your seat and you were sat down and they would record and show you what the films were but before the interval used to come along and they used to give you music and show you pictures of what adverts as the olden days used to be and then they used to put the lights off and they used to sit within the dark and then people in front of you, you could more or less see what was going up at the cinema because you were so high up in the seat and then they would show you for a bout a film would be westerns or particular thrillers but I mean it was always films that would last about 2 hours and then you used to say well we used to go in, sometimes there was a film on when you went on so we used to sit and wait till we saw the end of the picture and then used to sit till the next picture came on and saw the vision of what was going on before, what we’d missed. But then of course as they were going near the end the lights would come on again and tell you it was time to go out but it was a nice little cinema I mean they were very helpful with, obviously you had the ice cream usher with the tray and they used to put the sweets or things you used to get the ice-cream in a block and the cornet separate so you didn’t have, you had to put the ice cream into the cornet but I mean there were little lumps of you could get a square but they weren’t actually loose it was in a little packet or you would get the wafers but they didn’t actually prepare the ice cream you had to go and get it from the person. I mean when you think about how cheap it was, nowadays ice creams so expensive. Of course they had, some people had their nuts and their popcorn, used to have the pop corn but it was so little the bags were so little that they actually used to just say well we’ll by two packets but they’re not as big bags as they are now but I mean my husband and I we used to sit and listen to the actual picture but it was, sometimes they were very boring, sometimes you just didn’t like them, sometimes you had to go with what was on actually what they were filming till your turn for the picture you wanted to see came on but it was taken from when the cinema they used to have a man used to come on a bike and they used to take the film to the cinema and the film was taken an hour after on the on the Raby cinema so it would go from one cinema to the next then after the matinee performance then it would come back and that’s how they used to work the cinemas years ago.

What did it feel like going to the cinema?