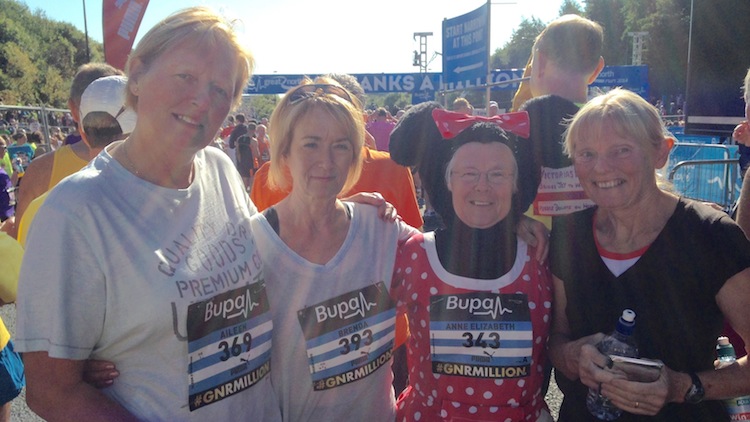 How a retired Head Teacher found herself in the middle of the Great North Million Opening Ceremony - as a pole dancing tree!

Sometimes we find ourselves in places we never expected to be, doing things we never expected to do. So it was with me on the evening of Thursday the 4th of September, standing on the Millennium Bridge, wearing a blue boiler suit a 10 foot pole with a lantern on the end lying at my feet together with green plastic branches attached to a green painted drainpipe, and thinking please don’t let me forget what to do first.

Forgetting things is something I do rather a lot nowadays, but I’ll never forget that evening, nor the weeks leading up to it.

So why did I a retired headteacher, volunteer to be a performer in the Great North Run Million Opening Ceremony.

Well I have quite a history in the Great North Run. It has been part of my life for the last 34 years as I am one of only 4 women to have completed every Great North Run. I am also the co-ordinator of the All Runs Club. But I’m not a dancer. However the information said no experience necessary, and it looked like it was going to bean amazing even, and it was the start of a special Great North Run Weekend………So application made and much to my surprise, accepted.

Then it was the first Saturday Rehearsal. We were to be in the opening section of the show on the Millennium Bridge. A request was made for people to carry lanterns and, thinking that might be better than prancing around too much only 3 days before the Run, I volunteered. I told my family when I got home.exhausted..on that first day, that I was going to be a pole dancing tree.

When it became known that I was running on the Sunday and that it would be my 34th Run, one lady came up to me and said” you’re Minnie Mouse, aren’t you?” After that I had to answer to Minnie as well as my own name and it was lovely to see some of them cheering me on during the Run.

By The end of the second Saturday Rehearsal we had really begun to bond as a group. Especially Joanne and Sharon, the trees to my left and Deedee, who had travelled up from London to take part and was the tree to my right as well as my houseguest for 2 nights.

Okay, back to the beginning. Its 8.55pm on the millennium bridge and I hear Nathans voice sounding in my ear….”take your position.” So I knelt down listening to Jill Halfpenny’s opening words. The music was reaching a crescendo and suddenly it was time to switch o my lantern and stand up. The next hour seemed to pass by in a Blur. The whole thing was really magical. The words; the music; the fireworks; the crowds; the simply being part of it. Standing o the Quayside, glow sticks in hand, waving to the giant flaming edifice depicting the one millionth finisher running along the Tyne, had me in tears. The weather was perfect and we even had the fog on the Tyne, courtesy of the pyrotechnics.

The event was billed as a once in a lifetime experience and it truly was. It was an honour and a privilege to have been able to take part. Thank you.