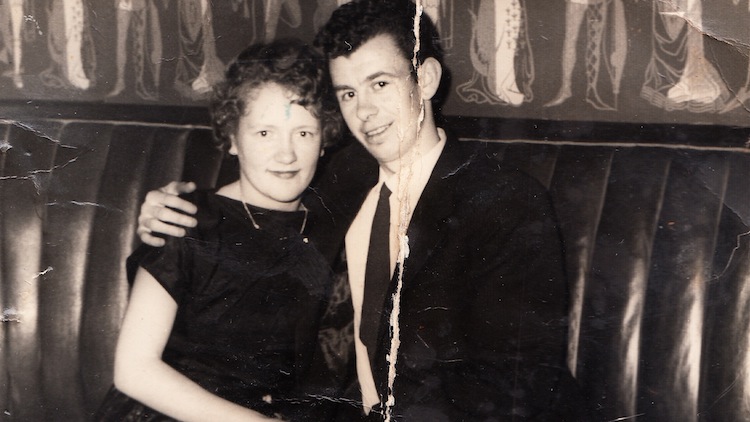 Sandra chances upon the Queen Mother as she walks to work on an ordinary day in 1961.

My first job on leaving school was to work in the drawing Oofice of Hawthorn Leslies who built the engines for large ships. Hawthorn Leslies was based at the bottom of St. Peters. It was a long street, a shabby street with thirty Tyneside flats on one side, cobbled road and an embankment, a large wall bordering on allotments on the other side. So it was a very wide street. At the bottom, you went through a gate and you were onto the station, the St.Peter's Station. It was a commuter type rail line where men and women were taken from Byker to Willington Quay to be dropped off for their place of work at many different factories and shipyards.

One night as I was going home in June 1961 with some friends from the Drawing Office, there were some painters painting the station as we came up from the subway onto the platform. I asked one of the men what they were doing and these friends of mine were always pulling my leg being the youngest and they said “Oh, didn't you know the Queen Mother's coming here?” And I thought “ There's no way the Queen Mother is coming to this shabby place” and I just ignored them.

A few days later I was hurrying back to work and I was late and I knew I would get into trouble. It was a lovely sunny day and, as I turned down the street, suddenly I saw a great shiny car coming up the road, over the cobbles and I think it was a Daimler cos I read afterwards that the Queen Mother always preferred a ride in a Daimler car. I stood transfixed, a solitary figure on this wide grass verge, no-one about. A few ladies stood at the door in their pinnies just looking out. There was no noise, there were no men, there were no children and slowly the car came up and it passed me. I was about four feet away from it and there, sitting serenely and smiling straight at me was the Queen Mother and she gave me the royal wave. I looked and didn't know what to do. I was gob smacked as they say and I feebly raised my hand in a half hearted wave and just stood there standing like an idiot.

Apparently she had broken her foot and was coming to launch the SS Northern Star at Vickers Armstrong and she was in a wheelchair and that was why she had come via the station She eventually went to Vickers Armstrong where they had arranged a bottle of champagne, fixed so she could push it upwards towards the ship to launch it.

The ship wasn't very lucky. It left the Tyne that night, a strong wind caught it and it nearly smashed into South Shields pier. The tugs were able to steady her but she was humiliated as she left the Tyne, stern first and, about thirteen years later, she was sent to be demolished in Taiwan, similar to the shipyards which died around the same time.