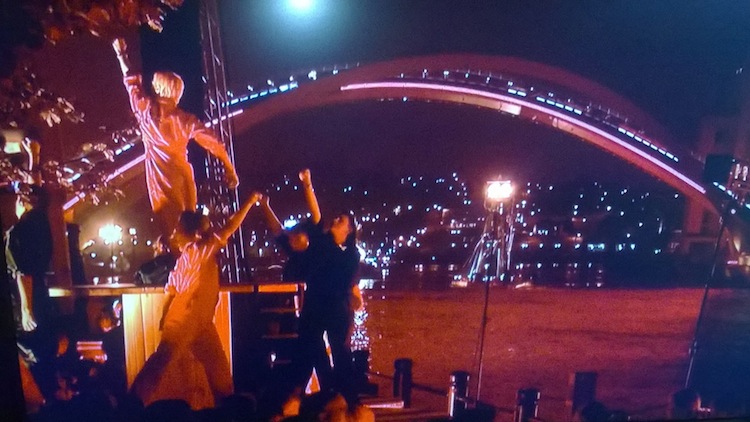 Sonya's story tells of her amazing once in a lifetime experience as a volunteer dancer, performing on the Newcastle Quayside as part of the Great North Million Opening Ceremony.

As soon as I heard about the Great North Run opening ceremony on the news I just knew I had to get involved.

I trained in performing arts and I’m so proud to come from the northeast so to be fair I probably would’ve sold a kidney to be a part of it. I found out I’d been chosen to be a Spools performer in the summer and there’ll be about 40 of us spoolies dancing on metre and a half high cable spools along the quayside with all the other volunteer performers working between us. Other than that I had no ideas what to expect until I turned up for the first rehearsal.

So when Nathan the director gathered us together to talk us through the scale model of where we’d be and what he had planned we knew it was going to be something really special like really amazing, really once in a life time.

“So you’re going to be on one of these towers made of cable spools”,

“The top levels about 3 meters from the ground”,

“They’ll be about half a meter away from the river”,

“And it will be really dark but there will be pyrotechnics and steam and flares and loads of other effects going off right next to them while you’re dancing”,

“But you’ll have a front row view of Jimmy Nail, Mark Knopfler and Sting”,

“Nathan; you had me at Jimmy Nail.”

I’m only 5 foot 2 so getting onto the spool to rehearse was like watching an umpa lumpa wrestle a giraffe and if I’m honest the six of us who made up spool 6 were the naughty spool. There was josh, Christina, Lucy, Jen, Sarah and myself and we never stopped having fun. By the time you added our dance captain holly into that we were just a bundle of mischievous energy from start to finish we were just so excited to be there. We had about 6 rehearsals in all and the atmosphere at all of them was amazing. Every single person there was so in awe of what we were tying to achieve, I guess none of us ever wanted it to end; we didn’t want it to ever be gone.

On the night of the opening ceremony we all met at the Sage to set off. Spool 6 were one of the first groups to make it down to the Quayside over the Millennium Bridge into the Tyne bridge end. We stood outside the Sage and it was jaw dropping. All we could see along the opposite bank of the Tyne through the darkness was people, like hundreds of people, thousands, just all there to celebrate the things that made Newcastle proud and there to pay their respects to the great north run.

Walking down was awesome I was one of the first people to cross the millennium bridge when it opened but walking past all the crowds was really emotional. People were stretched as far as you could see, clapping, waving, cheering, photographing, waiting.

All of the way through the opening ceremony we could hear Nathan directing us through our eight pieces but the one thing he kept saying that stood out was; “take a moment to just enjoy it” I sat on my spoon while Mark Knopfler played “Local Hero” and it was just magical. For a second it was like no one else existed and I’ll never forget that. The actual performance was the first time we’d seen everything we’d been told to expect……Sting, arial performers, fire boats, Viking ships, projections, floating pit heads, a huge running woman on fire floating up the Tyne, it was all over too soon, we all wished we could just be there forever.

At the end I gave my glowsticks to a bairn who’d been sat on his dads shoulders pressed up to the barriers the whole way through with his mouth wide open in awe. The crowds dispersed. People started to make their way home full of conversations and stories of the nights show and I watched this little boy run up the hill from the Quayside playing races and using his glowstick as a relay baton because that’s what the Great North Run Million was all about.