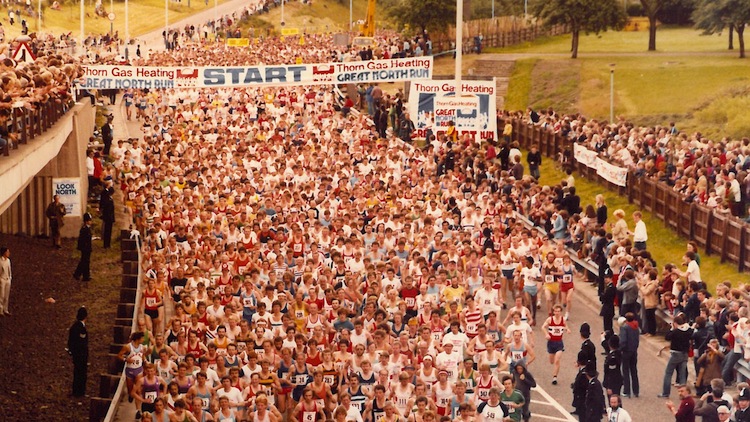 Eileen documents her own epic journey of the first Great North Run, from waving off her husband at the starting-line to meeting him at the finish-line.

Sunday 28th June 1981, the very first Great North Run. It was in the same year that Prince Charles married Lady Diana Spencer and, looking back over thirty years later, I can say I was there.

The day had started off early. My husband David was going to do the run after months of training, a special diet including lots of pasta and running through the streets of Gosforth at weekends and during the week in Winter and early Spring.

Our son Mark and I were to be the back up team and we all left home very early that day, dropping David off on the edge of the Town Moor to get to the Start then Mark and I drove to South Shields to be there at the Finishing Line on the Links with a change of clothes and a picnic.

When we got to South Shields people were already taking their places near the finishing line and, after jostling for position, I made sure we were well placed to see all the action. We had no idea of the huge number of onlookers who would turn out to see the runners. We could only see Race Marshalls running around looking busy.

Eventually the winner, Mike McLeod, crossed the finishing line in an amazing record time of just over 1 hour 3 minutes, followed by runners dressed in a variety of fancy dress costumes, some well known faces amongst them. I remember seeing Kevin Keegan with black curly hair dressed in a half and half shirt, one side black and white for Newcastle and the other side red and white for Sunderland. After what seemed a long time we finally spotted David in his white shirt and shorts among the runners. I managed to catch up with him just before he was collecting his medal and tee-shirt. He'd done it in spite of badly chafed legs, blisters and attacks of cramps along the way.

It was all so haphazard then. Now it's highly organised and professional. I've been to several Great North Runs since then, as the back up team when other family members and friends have taken part, taking them to the Starting Line on the Central Motorway in Newcastle and collecting their shedded clothing before the race started. Then walking down to the Haymarket to catch a crowded Metro train to South Shields then a long walk along Ocean Road and onto the Links to see the thousands of runners coming through. It's as if I've been doing the Run myself.

It's a world class event now with runners and celebrities from all over the world taking part and it's a truly spectacular event but nothing can beat the excitement and memories of that first Great North Run over 30 years ago.