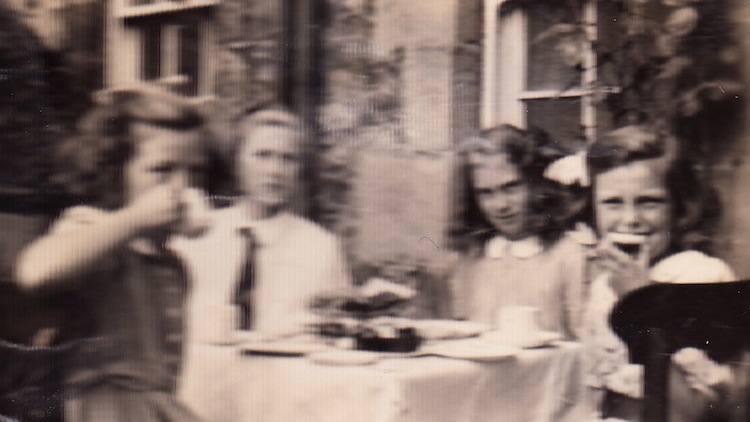 Evacuation from Newcastle to Seahouses during the war may have been an adventure for Janet, but after three years she soon realised that there’s really no place like home.

When war was declared I was 8 years old and my world, along with everyone else’s, was turned upside down.

Our parents were strongly advised that we should be evacuated away from the expected bombing in Newcastle to Seahouses on the coast.

Wise or not I wonder?

So we reported with our gas masks to Chillingham Road School, were labelled, received parcels of corned beef, milk and biscuits as presents for the hostesses we were going to meet and walked with our parents to Heaton Station. Amid tears and waves a special train took us to Chathill. From there into a barn to be sorted I suppose and then into cars to be driven to Seahouses. And then we were just dropped at various addresses where people had volunteered to have us.

I know now that Seahouses is no distance but it seemed a long way to me and very different from home.

My first billet was a funny little General Dealer's shop run by a young childless couple and I hated it. Even now, some smells can take me back to that place. Anyway they didn't cope with the miserable child so I was sent to a well to do couple who owned the local garage but they also weren't used to children. They were very nice but unfortunately there was another evacuee there who wet the bed- not nice for me as I had to share- and so we went to a place where there were five of us, including two daughters of the house, no inside loo, which didn't help the bed wetter, no bath (though we went elsewhere for a weekly shared bath) just a sink, no radio for news of the war – just how different from home could it get?

But there I stayed for nearly three years.

We were told the government only paid 10s 6d a week for us but I knew that when my parents regularly visited, my Dad paid my keep. We had to help with various duties and my favourite was looking after the hens and ducks they kept near by. Our education at first was in the village hall with one teacher but as some children went home, though parents were advised against it, we were integrated into the village school.

When I was 11 years old, I passed the Scholarship so had to come home back to Newcastle despite the bombing, to Senior School, another upheaval. But it was lovely to be home to my own Mam and Dad and Gran, not to mention my own bedroom and bathroom and “Workers Playtime” and “ITMA” and the like on the radio. I had seen my parents as they were able to visit- it was upsetting when they went home-you mustn't fuss or cry of course- but, in retrospect, I would much rather have stayed at home all the time.

It must have been very hard, for my mother especially, but remember our physical safety was paramount, child psychology hadn't been invented, so how we felt at being uprooted came second, understandably.