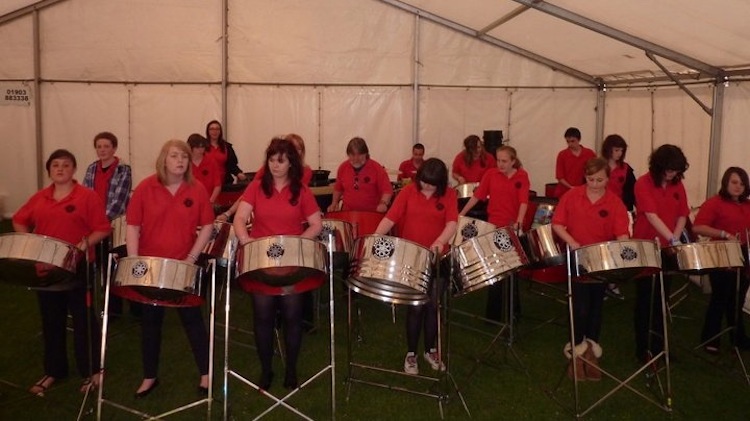 Sheridan's digital story is about her involvement in a steel band and how proud she was when they took part in a recent competition.

It’s the 7th of July 2011 and its one of the biggest days of my life. I play in a local steel band, North Tyneside Steel Band. This year we entered a major competition named Music For Youth, we progressed to the regional stage with ease but today is the day we perform and find out if we’ve progressed to the ultimate prize: performing at the Royal Albert Hall. There are quite a few steel bands performing today and only one will go through so this is absolutely massive. I breathe slowly trying to calm my nerves, I cannot slip up, I cannot make mistakes, this is the single most important performance I will ever do. Before I know it its time. I give a band mate a quick hug before we step out into the hall to applause. I stand behind my pan and grab my sticks, I breathe. It wasn’t perfect, I know that much, the nerves made me slip up at the beginning of the first song we played but once we settled in really began to enjoy myself.

Looking back it was the most enjoyable performance I have ever done. We played the final notes of our cover of Queen’s Bohemian Rhapsody and the hall erupted into applause, it lasted a long time and I’ve never felt so proud. We couldn’t stay and enjoy the moment though, our pans had to be removed from the stage pronto. After a lot of lifting and a short performance in the streets of Birmingham, I returned to the concert hall for the final verdict. Only one steel band was going to get the award for best performance, which basically meant they were going to perform in London. The judges gave their reviews and then it was time. The award for best performance goes to ……the Littlehampton academy steel band.

My heart stopped. It wasn’t strictly over, but I knew it was. The disappointment I felt in that moment was unparalleled to anything else I’ve ever felt in my life, it was all over. Looking back and getting over the initial dismay, I’m very proud of what happened that day. Obviously I wanted to play at the Royal Albert Hall with all my heart, but the knowledge that we as a band accepted defeat graciously and did the absolute best we could makes me very proud indeed.

Name:
Olympians of the Future

Description:
Stories from young people in the North East during the run-up to the London 2012 Olympic and Paralympic Games.